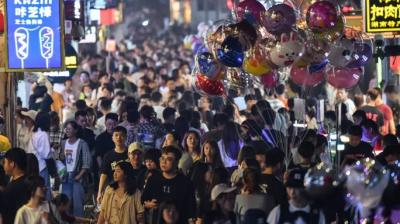 Beijing: China will now allow couples to legally have a third child as it tries to prevent a demographic crisis that might threaten its hopes of increasing prosperity and global influence.

As part of decades of efforts by the ruling Communist Party to regulate family size based on political directives, the ceremonial legislature revised the Population and Family Planning Law on Friday. It is six years after the last change.

Beginning in the 1980s, China strictly restricted most couples from having one child. The policy threatened with fines or unemployment, leading to abuses including forced abortions. Preference for sons causes parents to kill baby girls, leading to a serious imbalance in the sex ratio.

The regulations were relaxed for the first time in 2015 to allow two children, as officials acknowledged the imminent consequences of the falling birth rate. The overwhelming fear is that China will grow old before becoming rich.

However, China’s birth rate parallels trends in South Korea, Thailand, and other Asian economies, and has been declining before the one-child rule. According to data from the World Bank, the average number of children per mother fell from more than six in the 1960s to less than three in 1980.

At the same time, the number of working-age population in China has declined in the past decade, and the population has barely increased, which has increased the pressure of an aging society. The decennial government census found that the population increased to 1.411 billion last year, an increase of 72 million over 2010.

Japan, Germany, and some other wealthy countries face the same challenge, which is the reduction of the labor force that supports an aging population. However, they can take advantage of investment in factories, technology and foreign assets, and China is a middle-income country with labor-intensive agriculture and manufacturing.

At Friday’s meeting, the Standing Committee of the National People’s Congress lifted fines for violating previous restrictions and called for increased parental leave and parenting resources. It is necessary to introduce new measures in fiscal and taxation, education, housing, employment and other areas to reduce the burden on families. “

It also tries to solve the long-term discrimination against pregnant women and new mothers in the workplace, which is considered to be one of the main factors hindering the birth of more children, in addition to high costs and cramped housing.

Although the proportion of women in the labor force is high, women, especially women with children, are seriously underrepresented at higher levels, accounting for only 8.4% of central and provincial leadership positions. Of the young party leaders who will be in power in the next few decades, only 11% are women.