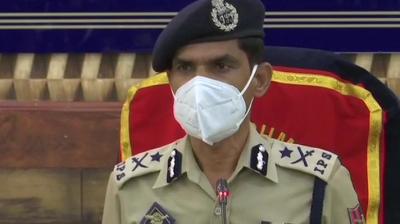 Srinagar: In the context of concerns and speculation about the possible invasion of the Taliban in Afghanistan, a senior police officer engaged in counter-insurgency operations in Kashmir stated on Saturday that the Indian army, J&K police and other military police will “act professionally in this situation. “.

“If any foreign power enters Kashmir, the J&K police, military and other security forces are prepared to respond to the challenge in a very professional manner. As far as the Taliban is concerned, I can’t speak, and those who have the right to speak can speak,” Chief of Police Vijay. Kumar told reporters here.

He also said: “As a police officer, I can say that if someone comes here, my job is to collect information and carry out operations with the army to eliminate threats. Any future challenges will be handled in a professional manner. We are completely vigilance.”

He said that security forces and official agencies will seek public companies. “If there are any factors, any terrorist or suicide bomber has any plans. We will look for information from locals. If anything happens, locals will be affected because Tourists will be afraid to come here.”

He asked, “If this happens, whose economy will be affected”, he personally answered the question, “it will be locals, so I will ask them to share information.”

IGP stated that there is some input regarding new penetration bids across the line of control (LoC). “The terrorists killed recently in Bandipora have infiltrated this year,” he said.

When asked about the increase in the number of incidents in which mainstream political parties, especially BJP militants were killed by suspected militants, the official said that this has been happening in J&K since 1989.

“We cannot provide security for everyone, but yes, those facing threats and vulnerabilities must approach us, and we will provide them with security,” he said.

Simply IT, LLC specializes in IT management in Allentown and…