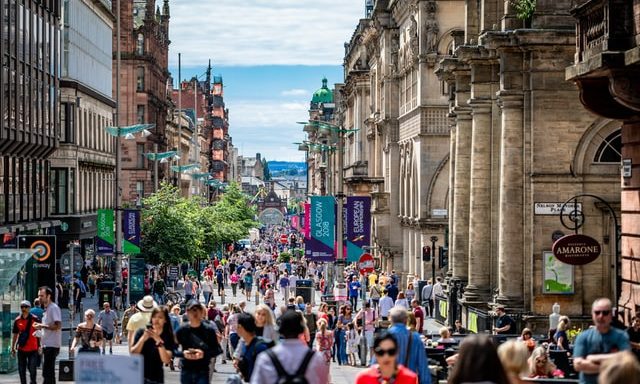 Passenger flow Sales in UK retail destinations rose 1.5% last week from the previous week, according to the data springboard.

Mainly the growth of the high street, foot traffic rose 7.2% in what Springboard said was “an early sign of confidence in returning to the office.” By contrast, footfall at retail parks was down -4.9%, and footfall at shopping malls was down -4%.

This was helped by an increase in foot traffic in all types of towns last week, from 3.6% in historic towns to 12% in Springboard Centre London Back to Office benchmarks.

However, foot traffic fell every day from Sunday to Wednesday, with a four-day average of -7.4% and an average of -12.4% on Monday and Tuesday.

From Thursday to Saturday, passenger traffic increased every day from the previous week, with an average increase of 13.4% over the three days, with a peak on Saturday, a 17.3% increase over the previous Saturday.

The gap with 2019 for all UK retail destinations narrowed slightly to -21.3% last week, but the strong performance of the high street improved its position relative to 2019 to -26.9% from -30.9% the previous week.

In contrast, footfall declines in retail parks and shopping malls meant that compared to 2019, the footfall gap for these two destination types widened to -4.2% and -26%, respectively.

Diane Wehrle, Director of Insights at Springboard, said: “The results for the second week of the year were mixed. There was an overall increase in footfall across all retail destinations in the UK compared to the previous week, but the growth was driven entirely by high streets, while activity in both retail parks and shopping centres was mixed. has declined.

“It appears that while the government’s Plan B guidance on working from home where possible remains in effect, there are signs that employees are starting to return to the office; for the first time since mid-November, foot traffic on the street increased over the previous week at all times of the day, For the second week in a row, there was a double-digit increase when employees headed to the office on the first part of the day.”

“Ultimately, the week was also one of two halves, with a drop in traffic from Sunday to Wednesday (double-digits on Monday and Tuesday), but then a significant increase in traffic for three consecutive days. This pattern is seen across all destination types Both were replicated, however, in shopping malls and retail parks, the increase in footfall from Thursday to Saturday was not enough to offset the decline in the previous four days. Unusually, footfall in retail parks decreased on Saturday , while foot traffic in high streets and shopping malls has increased significantly.”