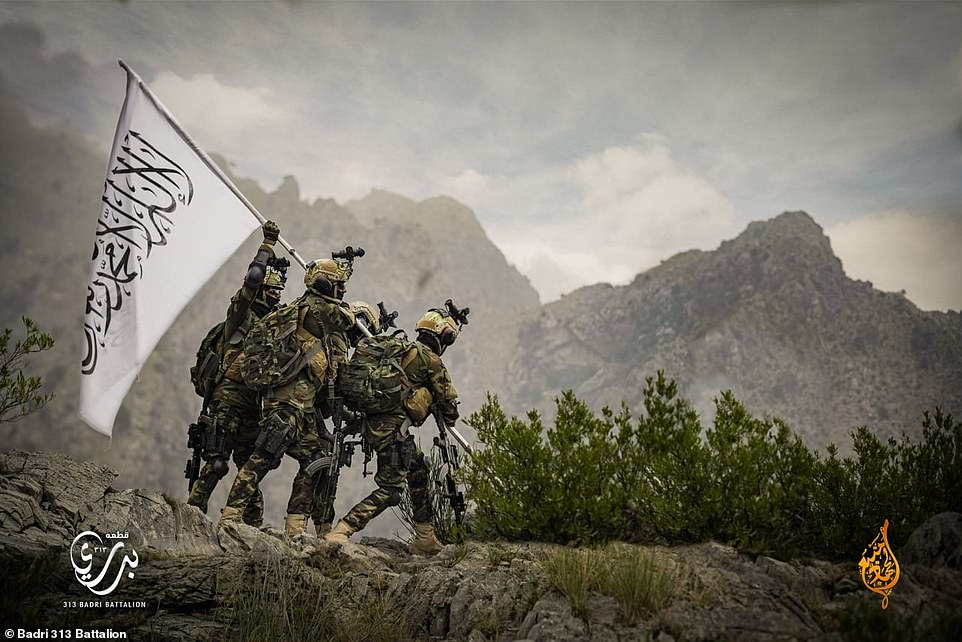 A group of Taliban fighters released a collection of propaganda footage, including a photo where they mocked the famed World War II picture of soldiers raising the American flag on Iwo Jima.

In the original 1945 photograph, a group of six Marines are depicted hosting the flag on Mount Suribachi.

The Taliban’s Badri 313 Battalion recreated the image this week.

In their version, a group of soldiers is seen hoisting the Taliban flag in a similar fashion while sporting U.S. weapons and gear that was likely stolen from allied militaries during patrols of Kabul.

A group of Taliban fighters recreated a fame U.S. WWII photo in a collection of propaganda footage they released this week. In their recreation (above), a group of soldiers is seen hoisting the Taliban flag while sporting U.S. weapons and gear 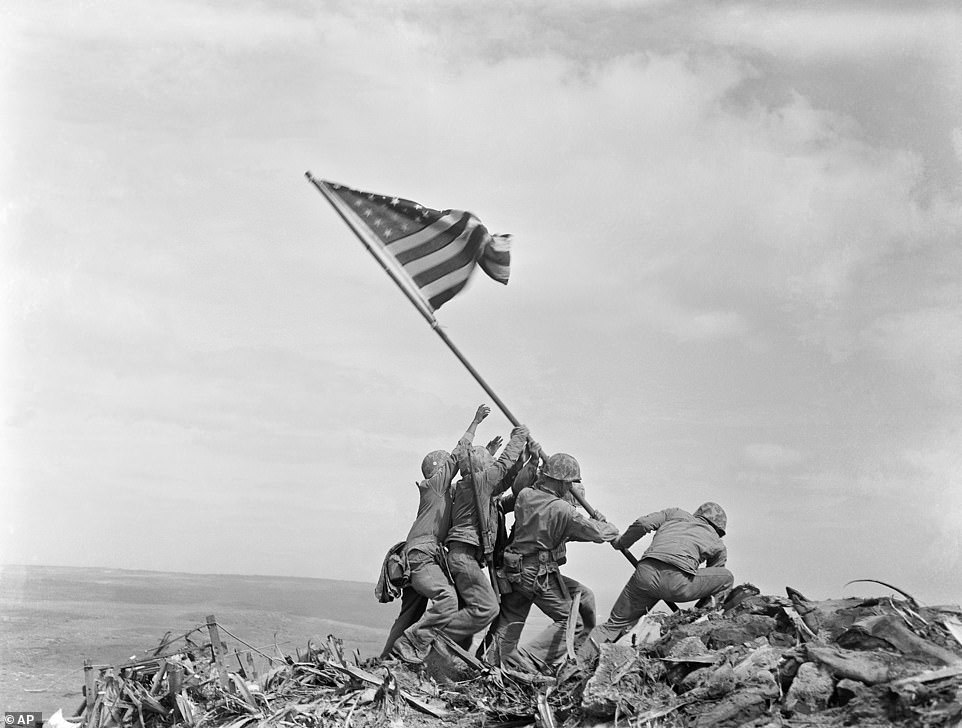 In the original 1945 photograph (above), a group of six Marines are depicted hosting the American flag on Mount Suribachi during the Battle of Iwo Jima

The Badri 313 is a special unit of Taliban fighters that dress like U.S. soldiers by wearing camouflage, combat boots and body armor. The soldiers drive armored Humvees and carries M4 carbines.

The Badri 313 was reportedly named after the Battle of Badr that is written about in the Qur’an, in which the Prophet Mohammed successfully defeated an enemy force with just 313 men – some 1,400 years ago.

The unit, previously unveiled by the Taliban in promotional material, are reportedly highly trained and equipped with state-of-the-art military equipment.

Where the unit acquired the equipment is unknown, but it appears to be a combination of U.S. military hardware and that use by Afghan forces, likely seized as Western and allied forces withdrew from the country.

In videos released by the group, the Badri 313 soldiers are seen with military helmets and sunglasses instead of the usual tuban, bullet proof vests over camouflage jackets and trousers instead of the typical robes, and armed with tactical rifles.

In addition, the unit appears to be armed with modern sidearms, wearing modern combat boots, and even have night vision goggles – making them difficult to distinguish from any other country’s special combat units.

U.S. officials say the militant group has seized what remains of the approximately $28billion in weaponry that America gave the Afghan forces between 2002 and 2017.

‘Everything that hasn’t been destroyed is the Taliban’s now,’ one official told Reuters on the basis of anonymity.

Elias Yousif, deputy director of the Center for International Policy’s Security Assistance Monitor, argues that the seizure of American weaponry is a propaganda move, noting that the group took advanced aircraft they are unable to operate due to lack of training.

‘When an armed group gets their hands on American-made weaponry, it’s sort of a status symbol. It’s a psychological win,’ Yousif told The Hill.

‘Clearly, this is an indictment of the U.S. security cooperation enterprise broadly. It really should raise a lot of concerns about what is the wider enterprise that is going on every single day, whether that’s in the Middle East, Sub-Saharan Africa, East Asia.’

When asked about the seizure on Tuesday, White House national security adviser Jake Sullivan said: ‘We don’t have a complete picture, obviously, of where every article of defense materials has gone, but certainly a fair amount of it has fallen into the hands of the Taliban.’

‘And obviously, we don’t have a sense that they are going to readily hand it over to us at the airport,’ he added. 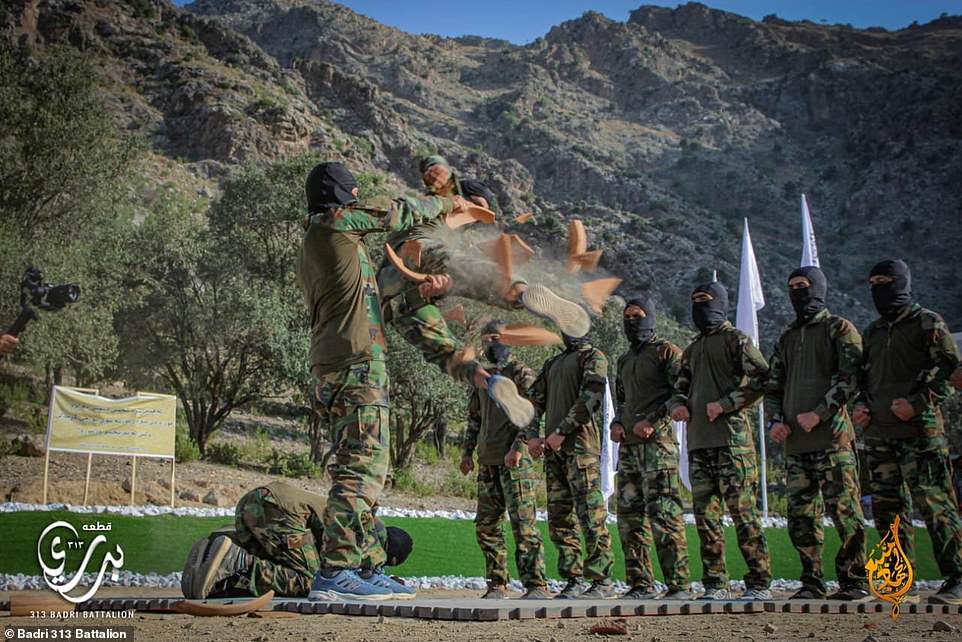 The Badri 313 (pictured above) is a special unit of Taliban fighters that dress like U.S. soldiers by wearing camouflage, combat boots and body armor 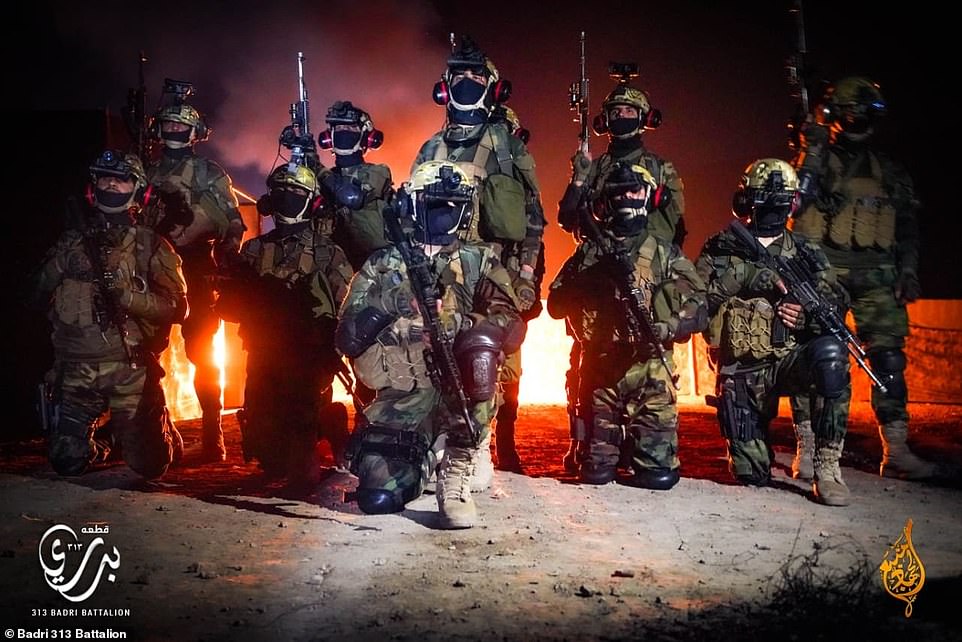 U.S. officials say the Badri have seized what remains of the approximately $28billion in weaponry that America gave the Afghan forces between 2002 and 2017

Analysts expect the Badri 313 to continue to grow in the next few months.

‘This has only been recently revealed, is a militia, a special operations unit of the Taliban that is being deployed not just in Kabul but elsewhere as well that has provided a completely different picture. No more just the sons of farmers and shepherds, a ragtag bunch of religious terrorists, but a special operations group comparable, perhaps, with the best in the world,’ said Shiv Aroor, senior editor and television anchor at India Today.

‘With the Taliban now in power, there is every reason to believe the militia could grow in strength. Expect to see much more of the Badri 313 in the weeks and months ahead.’

According to a report from India Today, the Badri 313 prepares like any other special forces commando unit, employing tactical and attack training in undisclosed locations run by the Taliban.

When the Taliban first released images of the Badri 313, experts believed that they were sending a signal that the group now had modern military capabilities.

A member of the Pakistan Defence website told the news outlet that it showed the Taliban were no longer a bunch of farmers, but a professional paramilitary force, with one experts suggesting they were even better equipped that Pakistan’s army.

Speaking to India Today, Indian Maj Gen GG Dwivedi said the ‘Taliban are highly ideological outfit and they draw their motivation from religious fervour’ adding that it is ‘Not a surprise to see them equipped. This is a danger to the entire region.’ 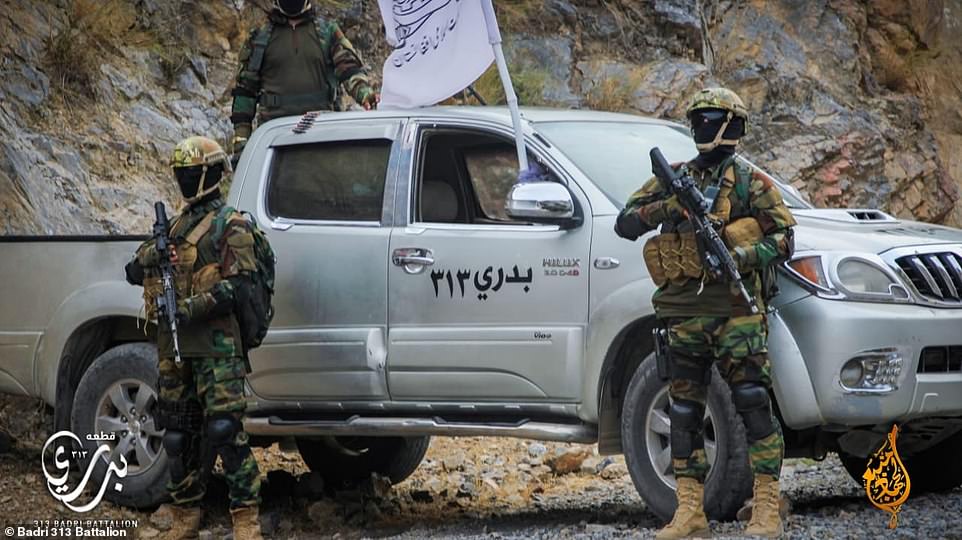 In videos and images released by the group, the Badri 313 soldiers are seen with military helmets and sunglasses instead of the usual tuban, bullet proof vests over camouflage jackets and trousers instead of the typical robes, and armed with tactical rifles 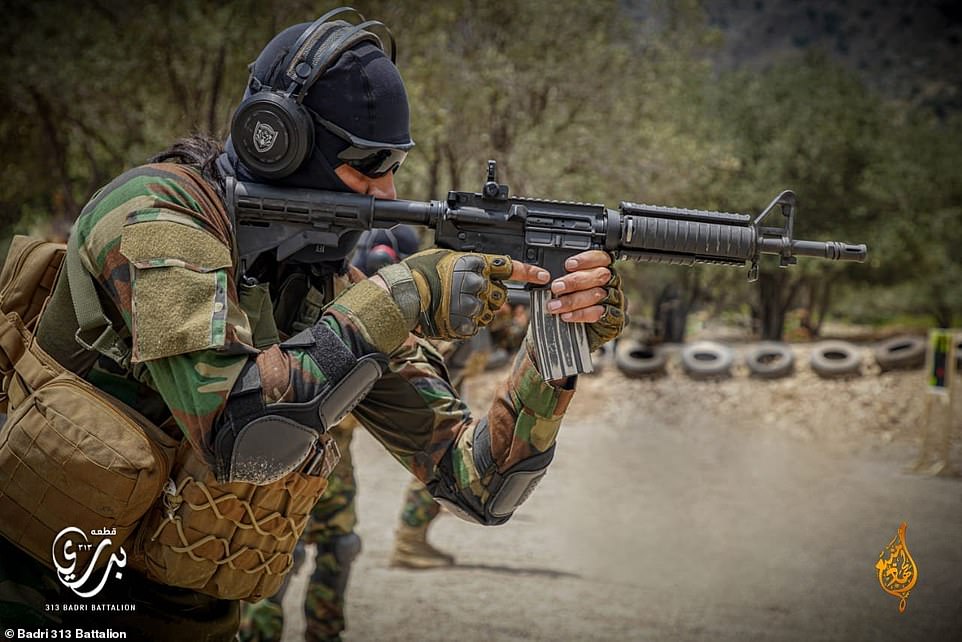 Meanwhile, U.S. national security officials are working to account for the nearly two decades worth of weaponry provided  to the Afghan military.

The Taliban has captured stockpiles of weaponry and vehicles that were previously controlled by Afghan forces.

Preliminary estimates suggest that, in addition to the Humvees, the Taliban posses mine-resistant vehicles, several Black Hawk helicopters and other US-funded military aircraft, a congressional source confirmed to CNN.

In addition to the M4 carbines and M16 rifles pictured in the propaganda footage, sources believe the Taliban may also have acquired twenty A-29 Tucano attack planes.

Pentagon officials have expressed concern about the seizure, but also say it is too soon to know what specific weapons and vehicles are now controlled by Taliban forces.

‘When it comes to U.S.-provided equipment that is still in Afghanistan and may not be in the hands of ANSF [Afghan National Security Force], there are several options that we have at our disposal to try to deal with that problem set,’ said Pentagon spokesman John Kirby.

‘We don’t, obviously, want to see our equipment in the hands of those who would act against our interest or the interest of the Afghan people, and increase violence and insecurity inside Afghanistan.’

The U.S. government says that, at this time, there is no plan to take any action to destroy the weapons being used by the Taliban. This will not likely change ‘unless something poses a direct threat to American troops at the airport’. 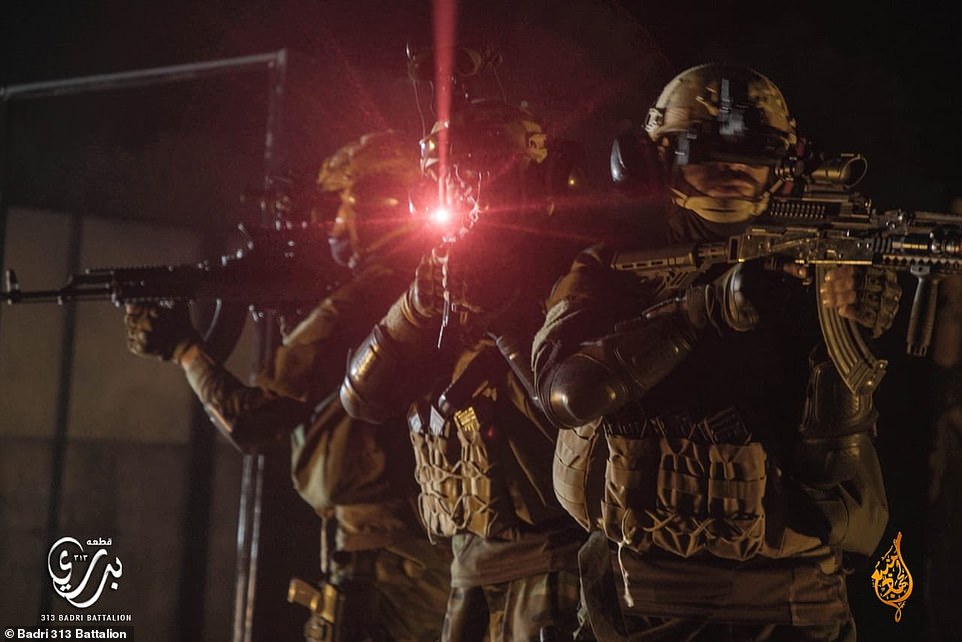 Pictured: Badri fighters donning night vision goggles, suggesting the Taliban would now be better equipped to combat night raids, or even carry out their own 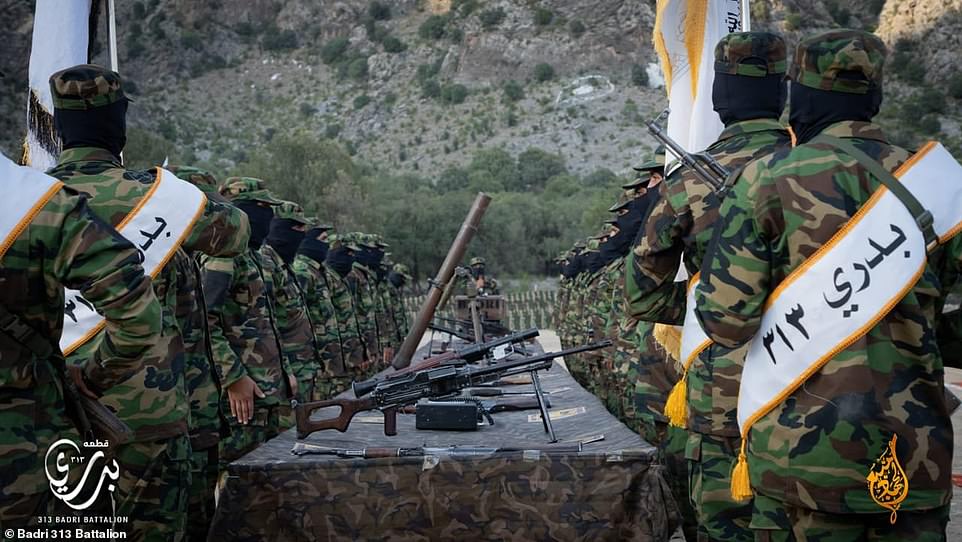 The U.S. Embassy issued a stern warning to Americans on Saturday not to go to Kabul airport – which is the only way out of the country – because of ‘security threats’ outside its gates a day after President Biden vowed to bring citizens and Afghan allies home.

‘Because of potential security threats outside the gates at the Kabul airport, we are advising U.S. citizens to avoid traveling to the airport and to avoid airport gates at this time unless you receive individual instructions from a U.S. government representative to do so,’ the Embassy warning says.

During a Saturday afternoon press conference, Pentagon spokesperson John Kirby declined multiple times to discuss if the ‘security threats’ were from outside forces – such as Taliban attacks – or dangerous, chaotic conditions just outside the gates.

At least 12 people have been killed in and around the single runway airfield since Sunday, NATO and Taliban officials told Reuters, and crowds have grown at the airport gates. 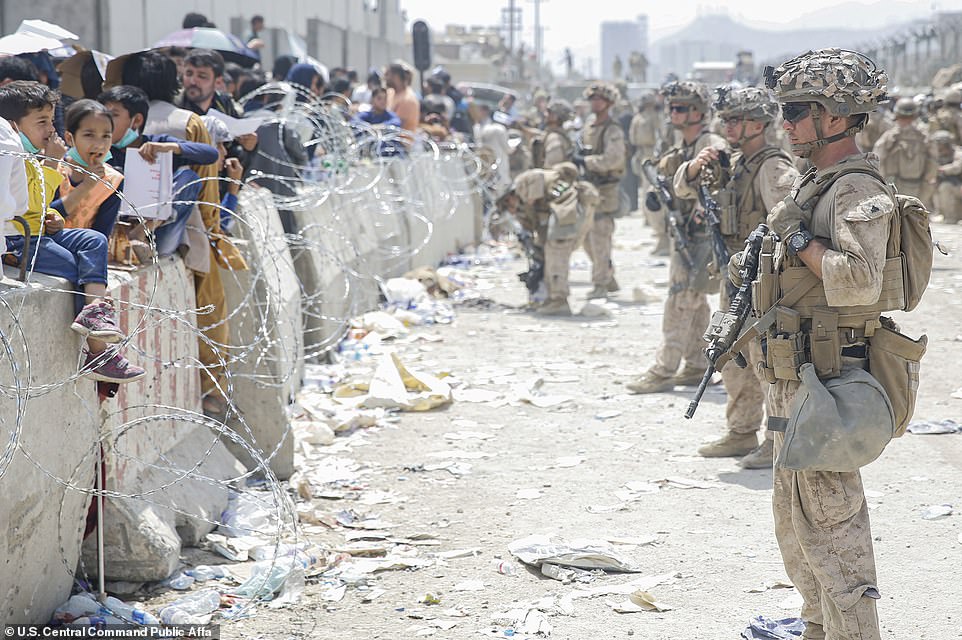 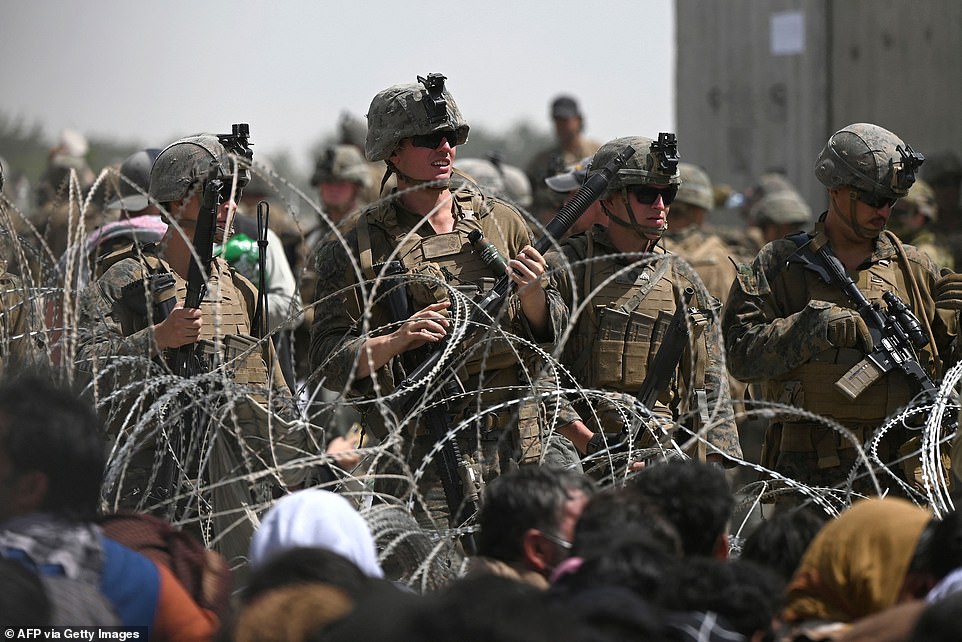 The Taliban have urged those without travel documents to go home.

The Embassy’s warning was issued less than 24 hours after Biden said there was ‘no indication’ that the Taliban was stopping Americans and their allies from reaching the airport and promised to get everyone home.

‘Let me be clear, any American who wants to come home, we will get you home,’ Biden pledged during the speech that he started 50 minutes late where he stumbled over answers.

About 3,800 people were evacuated on Friday after six U.S. Air Force transport planes with about 1,600 people were able to leave Kabul on Friday plus about 32 charter planes.

A State Department spokesperson said Saturday afternoon there are about 5,000 to 10,000 US citizens still in the country.

Why was the American flag raised on Iwo Jima?

Mount Suribachi was the island of Iwo Jima’s highest peak and arguably the most strategic position for troops.

The U.S. military was seeking control of the Japanese island, including Suribachi’s slopes, the History Channel reports.

Associated Press photographer Joe Rosenthal captured the iconic photo as American troops were fighting for control of Mount Suribachi. The picture has since became the most reproduced photograph in history

The soldiers reportedly cheered for the hoisting of the flag.

Rosenthal took a total of three photographs atop of Suribachi: the flag hoisting photo, a second photo very similar to the hoisting and a shot of 18 Marines smiling and waving at the camera.

The second and third photos were not nearly as affecting or famed.

The photo of the six soldiers hoisting the American flag became the most reproduced picture in history.

Rosenthal also won a Pulitzer Prize for the image.

Holiday Train Show and GLOW will return to NYBG in November!