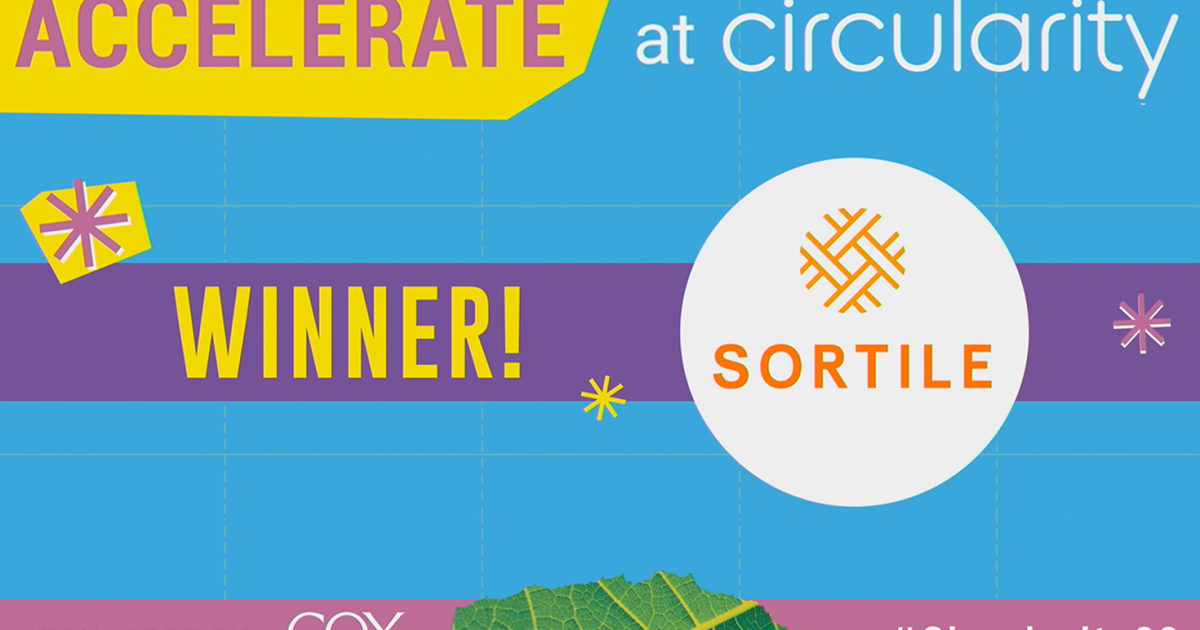 Sortile is working to build a more circular fashion industry. Roughly 92 million tons of global textile waste are created every year. And despite brand commitments on sustainability, including textile recycling promises, less than 0.5 percent of the global fiber market in 2020 was made from pre- and post-consumer recycled textiles, according to Textile Exchange. Sortile removes some of these key barriers for textile recycling, like the difficult sorting process and lack of data.

“I started my professional career doing research on Latin American retailers,” Sortile’s CEO Constanza Gomez, who grew up in Chile, told GreenBiz. “I was able to have a clear view of the amount of waste that was created in the industry. It quickly became a sort of obsession to understand why textiles were not recycled.”

Sortile’s co-founders, including Gomez who gave the successful two-minute pitch on stage, developed a device that can sort clothing by fiber composition quickly and efficiently. It uses a technology called near-infrared spectroscopy (NIRS), an optical imaging technique usually used to monitor blood oxygen levels in brains, muscles, and tissue, to detect changes from injuries or disease, for example. But Gomex came up with the innovative idea to use the technology to optimize textile recycling: when combined with Sortile’s proprietary machine learning algorithms , NIRS can scan apparel and identify several fiber compositions with 95 percent accuracy, according to the startup. The device cuts processing time by more than half by eliminating the previously manual process of checking clothing tags to sort different materials, at a much lower cost. Plus, this unlocks the data for its B2B customers, who gain more transparency into the stock. Companies that collect clothes (returns or donation s) can sell them back to fiber disposal recyclers — saving on sustainability costs, diverting material from landfills, and helping meet sustainability goals.

“Short term, we can really help propel post-consumer textile recycling,” Gomez told GreenBiz. “Many fiber-to-fiber recyclers are hesitant to use post-consumer waste because they do not trust the quality of the feedstock. If you can assure that the feedstock is appropriately sorted then you can propel and scale this industry.”

It’s still early stages, but Sortile has a long-term vision

While the company only launched in August, it already has garnered grants, engaged in consulting projects, and scored customers. “We have three paid beta customers, including Goodwill,” Costanza said onstage, adding that “the results from our first pilot completely surpassed our expectations. We were able to triple the volume that we’re processing and increased revenue per pound by 15 percent. And we’re only just getting started.”

Whitehead gave her seal of approval, as well, noting how unique all of the startups’ technologies were, but that the textile value chain was a special interest for her. “Being able to understand what’s in clothing — because so much is a blend, and that’s part of the challenge of being able to recycle it — and sorting is also difficult, so having any tools that are able to help is very valuable,” she said.

What’s next? This win provides validation for the company, Gomez told GreenBiz. The company is also looking ahead to raise its pre-seed funding.

Gomez also said that long term, she wants to change the economics around textile waste: “By making this a profitable stream for sorters then you change collection incentives and change the focus of only collecting for the second-hand market to collecting all textile waste. Additionally, collection will always be local, but recycling is a volumes industry. Since we collect data on everything that goes through our device, it allows for visibility into volumes which will aid in aggregating and creating consistent volumes which are crucial to scale textile recycling. ”

The runners-up: Circularize, re:3D, and StarWalker

The other compelling pitches on the main stage came from more circular economy entrepreneurs from around the world and right from Atlanta.

Samantha Snabes is the co-founder of re:3D, which boosts the use of recycled materials in lifesize 3D printing. The startup manufactures a device called Gigabot, an affordable industrial 3D printer that can directly print from plastic waste.

David M. Walker also presented StarWalker Industries, which supplies the community of Atlanta with bottled water (Integrity Purified Water and Positivity Alkaline Water) and provides the largest incentive to return the bottles available. The company is in the process of building a micro bottled water plant and recycling center, fostering a local closed loop system.

In addition, Mesbah Sabur, the founder of Netherlands-based blockchain startup Circulariseshowed how the new platform can create new transparency and traceability across supply chains. The goal? Help companies verify key product-related data (such as material composition, origin, certification, and CO2 emissions) all on a public blockchain, which would allow them to improve ESG performance, demonstrate responsible sourcing, and make progress towards a circular economy.